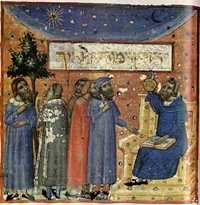 As January closes, I thought I’d address the recent tempest in a teapot surrounding astrology.

On January 13, 2011, the Minnesota Star Tribune interviewed astronomer Paul Kunkle. The gist of the article was the sun and moon’s gravitational force on the earth’s axis causes the earth to wobble, which over time makes the position of vernal equinox drift backwards in relation to the constellations. This is called the precession of the zodiac. As a result, he said, everyone’s sun sign is off by nearly one constellation.

The article quickly went viral and I received many emails and calls from students, clients, and friends who were confused by the information.

The “news” was anything but. Astrologers have been aware of the difference between the seasons (the equinoxes and the solstices) and the constellations since the second century BCE.  More importantly, this information does not affect your Western sun sign position: if you’re a Capricorn, you’re still a Capricorn.

In Western astrology, the signs are essentially units in a measurement system: each sign identifies a 30-degree segment of the sky, called the ecliptic, along which the planets and luminaries travel. The signs aren’t tied to the constellations at all.

Western astrology uses the first moment of spring — technically, the moment the sun crosses the celestial equator — as the start of its zodiac, the sign Aries. When an astrologer says your sun is in Aries, he/she is saying your sun is in the section of the sky we “call” Aries, not in the constellation itself.

The Western Tropical zodiac, the Indian Sidereal zodiac, and the constellations share the same names, though each of the three describe different methods of pinpointing the position of celestial bodies in the sky.

You can see how media and astronomical professionals could unwittingly conflate the different systems and mistakenly assume this mismapping supports their assumption that astrology is invalid.

The other pronouncement in the Minnesota Star Tribune article was the unveiling of Ophiuchus, the thirteenth sign. Again… not news to astrologers. Ophiuchus is a constellation that was used for a time by the Babylonians because a very small portion of it dipped into the ecliptic, the path in the sky the celestial bodies travel. However, most of Ophiuchus fell outside of the ecliptic, and dividing a circle by thirteen makes for clumsy math. On the other hand, dividing a circle by twelve makes for an elegant measuring system, so the Babylonians dropped Ophiuchus.

In short, your sun sign is your sun sign. Nothing has changed.  Astronomers simply don’t understand our measuring system and have confused the information.  It’s like a pronouncement by someone who uses the metric system that a system based on inches and miles is invalid because it’s not based on millimeters and kilometers.

If you’d like more information on this subject, I recommend the following article by Chris Brennan:

Below is a list of gemstones associated with the signs in both the Indian and Western astrological traditions. Indian astrology has a particularly rich and venerable history of working with gemstones within the context of the birth chart.

Specifically, the gemstone associated with one’s lagna, the sign on the horizon at the moment of birth, is considered beneficial for the individual.  If you have your birth time and would like to discover your lagna sign, see my instructions at the end of this article.

TO FIND YOUR INDIAN LAGNA:

You’ll need the following information: date of birth, place of birth, and, most importantly, time of birth.  Go to the following webpage: http://www.astro.com/horoscopes and select “Extended Chart Selection” at the bottom right section of the page.

If you’ve never had your Western natal chart cast, you can do the entire process again by clicking on “Free Horoscopes” on the navigation bar along the top of the page. Follow the exact instructions as outlined above. Since the “Zodiac” selection box automatically resets to “Western geocentric (tropical), this time you’ll create your Western chart.